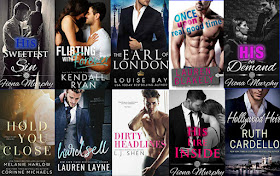 Due to Amazon's change in giveaway set ups I have a bunch of ebooks. None of these authors are participating and I hope they don't hate me for it but I was frustrated by constantly running a giveaway with not enough winners.

So running a rafflecopter to give these away in one go. This is open to U.S. residents only as the gift codes don't work outside of the U.S.

and that's the end of the eligible winners.

Everyone has been emailed. If you haven't received an email check your spam or email me directly at fionaainamurphy@gmail.com